Besides from the popular variate of hydrogen on demand fuel saving technologies scientists and inventors have also discovered various different technologies to run cars on water alone. If you want to save fuel you should obtain this pdf document from the panacea university and build a smack booster by it's instructions. The documentation below aims to show the validity of 100% water powered vehicles. Historically quite a few water powered autos have been build but the technology was either lost or never made public. The petrochemical industry is a powerful multi billion Euro enterprise. Governments depend on fuel taxes. Military power relies on technological advantage. The news media depend on advertisement revenue and the academic establishment loves clinging on to dogma.

1935, Charles and Dad Garrett's car had been in operation continuously for several days.
1942, Francisco Pacheco invented a device that turns sea water into combustible hydrogen.
1960, Edward Estevel developed a 'water auto system'.
1974, Stephen Horvath discovered a safe thermonuclear reaction that produces a mixture of highly ionized hydrogen and oxygen gases by combining electrolysis and radiolysis.
1980, Stanley Allan Meyer  converted and drove a VW buggy on water for four years.
1983, Carl Cella converted a 1979 Cadilac Coupe de Ville to run on water.
2002, Dennis Klein converted his car to run on water.
2005, Steve Ryan made a stock 350cc motorbike run on water.
2008, Genepax developed a battery charger and fitted it onto a stock electric car

We had 38% oxygen in the atmosphere in 1940. Today in 2008 the oxygen content of air in Tokyo can be as low as 6%, we have over 400 dead zones in the ocean and millions of people die per year from causes related to hypoxia, a pathological condition in which the body is deprived of oxygen. We are not just burning a hydrogen-carbon based substance, we are burning up the atmosphere along with it. Coal and petroleum are not a free rides but can and will eventually kill everyone. We should all agree we need air to breath. Burning hydro-carbons is not a perpetual motion device or a free lunch.

It may be hard for you to understand the fruits of research can not be judged without doing the actual research however the lack of vision is apparent to a child where 5 years into commercial aviation the establishment was finally prepared to implement the real world into the books. At no stage did mainstream science so much as entertain the thought. For 5 years the aerocrafts flew over the university while professors continued to debunk the "hoax". It doesn't take much imagination to see what happened to the few noble scientists who long before had produced workable theories towards such devices. Laughing people off the stage is never a constructive scientific endeavor. It equates with witch burning and decapitating heretics. In the short run one  may earn Enronian millions in the long run it makes it impossible for anyone to see the truth. 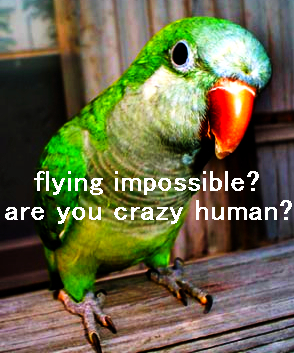 The truth is not anyone's opinion. The data requires hard work, in depth investigation and a review with honesty rather than preconceived arguments. The knife cuts at both ends, we have psychiatrists to diagnose insanity, such diagnosis from a physicist would be far outside his area of expertise. It would be an act of quackery in it self. We have wind tunnels because the math still doesn't fit the real world. Fission, superconductivity, crystal radio, optical lasers, microwave masers, X-rays and radio -research all suffered needless delay by ignorant skeptics. Why not be skeptical about oil reserves? Why not be skeptical about Exxon debunking alternative energy? Are you sure your septi think tank is not funded by big business?

Even to a mind with very limited imagination it cant escape the energy crisis fills big pockets with big money. From this single fact alone we can derive why mankind has no need for a Large hadron collider.(sorry Brian) Furthermore we conclude that while the global economy plunges into depression public funding is consumed by giant toys having zero potential for return on investment. If one argues the data is scientifically interesting we may then conclude scientific interests to be unrelated to real world progress. Compared to mind controll experiments on children, nuclear weapons, weaponizing of space or any other cryptonym of slavery the water fueled car is more than worthy of in-depth investigation, funding and implementation.

This is the moment of awe really.. Are you really saying it about have water fueled cars? Cool, this is what is known as 21st century where anything is possible.. Great, this is really amazing..!!
http://www.toplinemotorcycles.net