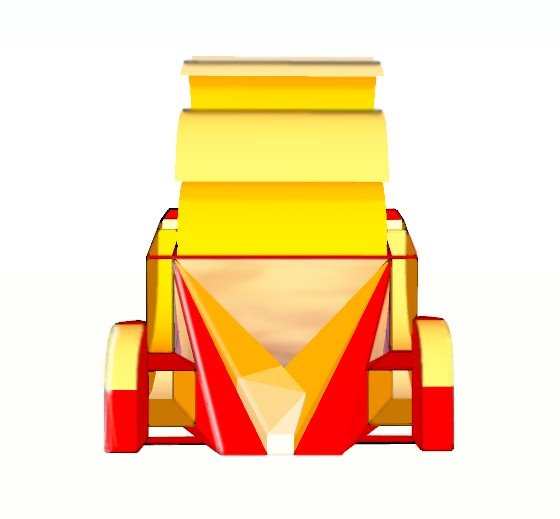 There wouldn't be Europeans living all over the globe if it wasn't for the power of the wind.  Long before that the Chinese had sail boats, the Egyptians had sail boats, the Sumerians had sail boats etc. I conclude A wind powered car is an oxymoron. The biggest problem is to fit such "sailboat" into existing traffic.This document would like to attempt to disclose a 4 wheeled, human-powered vehicle in it's propulsion assisted by a windmill and a small electric motor within the EU laws of the electrically assisted bicycles. The design aims to allow for the cheapest possible vehicle that is safe enough for the speed it reaches. The body for example is to be made out of inflatable materials while the rotor sails can be made out of canvas. The cabin lends it's structure from carbon rods available at local camping stores.


Imagine a windmill fixed onto a cart. We lock the wheels in place and use the wind to charge a battery. We may then use the electricity to move the cart. If there is energy available it will always be enough to move the cart, it might not go fast (yet) it will absolutely move. The windmill however doesn't become less efficient if we move it up the wind. On the contrary, moving the cart the availability of wind goes up, more units of wind pass though the mill and there is drag. The drag doesn't seem useful but it represents most of the losses, regenerating 50% of the drag would give us 150% of the "engine" power (ignoring the mass) We may overcome the (big) losses from converting the energy to electricity by using the mechanical energy straight away. Just like with the battery mechanical energy is always enough to move the vehicle. It might not go fast (yet) if there is wind it will always move. The vehicle can move in any direction we want it to move in. Driving up the wind the turbine spins backwards, it's rim goes much faster backwards than the car moves forwards. Driving it down the wind the turbine works more like a sail.

To get the most out of the smallest surface we have to use a turbine with a large contact surface. Such turbine will have only one active side.

But it would be better to bend the airstream onto the active area like this:

This ornament increases the efficiency of the wind turbine but it also allows us to "hide" the passenger in the turbine translating a large percentage of aerodynamic drag back onto the drive train. It would make the vehicle look something like this: We normally tend to leave a vehicle alone for say 8-14 hours then we use it for 30-60 min. Over such time a windmill designed for charging the battery would be more interesting than a mechanical contraption build for propulsion. It would require more parts but a combination of both may give us best of both worlds. From a legal perspective the wind energy doesn't exist so it isn't limited by law (yet).

I think it would be ideal to keep the motor within EU electrical bicycle assist margins. This means 250 watt is the maximum output and only as a means of electric-assist it should not propel the vehicle if the driver is not pedaling. It should be possible to collect the back emf returning from the motor and guiding this back into an additional battery bank. Only a few diodes? An idling electric motor can be supper efficient that way, the big trick is not to use it for acceleration but to prevent deceleration. Between each instance of pushing the pedals the vehicle is slowing down. Maintaining a fixed speed costs less energy then maintaining an oscillating speed.

Electric motors also allow us to use the magic of regenerative breaking. The motors would quickly tend to be to small and even if they could absorb the breaking energy the power surge the electric motors are trying to ram into the battery (& capacitors) would be rather big.

The perpetual car could thus have a belt driving a small flywheel in enormous gear ratio. Such can absorb most of the breaking energy. Because it's small it can only maintain a little bit of power over small a duration. It should however be big enough to cut down the breaking power surge sufficiently. Belt 2 in reverse but equally enormous gear ratio could feed the energy back onto the wheels in case the vehicle is allowed to accelerate straight away. Any flywheel should however be small enough not to have a negative effect on the wind propulsion.


There isn't any real need for a special kind of battery, any rechargeable cell will do. The intention of the project is to compare weight, performance and price. Matching the voltage with the motor and generator is of course desirable. We need breaks, it would be good to allow us to pump this back into the cell. There the batteries charging capacitance limits the productive breaking capacitance. It will also be interesting to look at using 2 banks where one charges while the other discharges.

The top part of the cabin is made out of a transparent tent held up by carbon rods (like in igloo tents) resting against the inside of the inflatable lower part of the cabin. The airbag is shaped to obtain the biggest safety gain out of it's surface area. It may be filled with helium to further decrease weight. The inflatable compartments can also add structure to the frame, for example a seat needs to be comfortable in order to get the most energy out of the human. Here an inflatable chair allows for a lot of comfort without adding any weight. This will make it cheap / light / safe / look good / aerodynamic / easy to build.

The wheels and batteries should be heavy enough to prevent the thing from flying away. (I hope) Then as a "side effect" the turbine will work just great up there. I haven't figured out how I'm going to fix the sails(rotor blades) on it but a simple U shape tube should supply enough structure. By using a flexible axle the generator can stay on the ground.

The potential damage the flying generator can do is probably much smaller that way.

plug the house in the car

In US Patent No. 583533 Edward P. Hart disclosed a simple and efficient mechanism adapted to be actuated by the force of the wind to propel a bicycle. dated June 1, 1897

In US Patent No. 599048 Thomas Lord Turner disclosed an invention related to bicycles and similar vehicles; where the object thereof is to provide an improved propelling mechanism for vehicles of this class whereby the vehicle may be propelled at a maximum speed with a minimum application of power. dated February 15, 1898

In US Patent No. 3315085 Joseph a Mileti disclosed an alternative power source for an airplanes March 12, 1965

For installation on the roof of a vehicle

In US Patent No. 4437698 Anthony T. Tantalo disclosed an electric/wind powered device to propel and reduce air resistance. He makes the point that the rotational speed of the rotor is a function of the linear speed of the vehicle and a head wind, if present. dated march 20, 1984

In US Patent No. 1903307 Battista Giovanni Gillio discloses a wind and drag powered vehicle having a generator to charge batteries to power a starting motor if insufficient wind is available. dated January 11, 1932

In US Patent No. 3513326 Harold S Potts disclosed a wind powered battery charging system for a car. dated May, 1970

In US Patent No. 4075545 Merle D. Haberer disclosed a pair of air driven impeller rotors mounted in the front end portion of a vehicle and operatively connected to one or more generators for charging drive motor energizing batteries responsive to forward movement of the vehicle. dated February 21, 1978

In US Patent No. 4314160 Leon Boodman and James P. Malone disclose a wind turbine to increase the range of an electric vehicle. dated February 2, 1982

In US Patent No. 3556239 Joseph W. Spahn disclosed a by wind and drag charged electrical vehicle having a small combustion engine. dated September 23, 1968

In US Patent No. 5280827 Cletus L. Taylor disclosed An electric vehicle with a large wind turbine mounted at the rear. A long venturi tube extends along the upper portion of the vehicle above the passenger cab and directs air flow from the front of the vehicle and impinges it upon an upper portion of the turbine blades. A pair of elongated lower screw-type turbines are contained in separate lower venturi effect tubes extending along the lower side of the vehicle below the passenger cab. dated December 22, 1992

In US Patent No. 3878913 Donald C. Lionts disclosed a windmill generator system for an electric vehicle.

I want to produce millions of cars but only if that brings the price down. The preferred marketing is the end user downloading the plan then building it himself, preferably using readily available parts.

This is very interesting and I decided to write this comment because the idea is not new to me. The wind comes in to a rotating generator that converts the energy to electricity. A transformer can be used to increase voltage in order to recharge the EVs battery. But why just use the wind? Couldn't you also use the wheels rotation? How about the energy that's created when breaking? When it comes to speed, I recommend you check this out http://www.teslamotors.com/models/features#/performance. Car goes to 130 mph. Hope it works out for all of you with the income to produce something like this!

I thought I had seen it all. But hey people thought the Earth was flat only several hundred years ago.

So far so good. I've seen usage of this concept grow, and Google seems to be interested in it. I don't think I'd base a business plan on it just yet though.http://www.coachests.com/